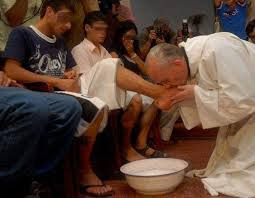 The other day I had a talk with a good, kind, sensible friend who approvingly referenced an op-ed in Sunday's NYT to the effect: Why can't you Catholics focus on what you do best--serve the poor--and just shut up about sex, about which you know nothing, about which you insist on clinging to your ridiculously medieval notions that any self-respecting modern person would be mortified to voice? Having been raised in the Church and long since fallen away, my friend can't possibly see, for example, why anyone of nominal intelligence, and the Church, would not counsel every woman in the world to get birth control. If women where in charge of the Church, she is sure THEY would change the "law"...

How can you tell people you have been saved from the abyss and thus live in state of insane bizarre grace and that you offer up your sexuality out of love? That to manage and control human creation, to the lover of Christ, seems monstrous? That when we say "I believe in God" we are really saying, "I view life as a gift, not as a possession"...

It's the secular world that's obsessed with sex. It's the secular world that has divorced sex from life. In my sixteen years in the Church I have never heard a single homily in which the priest exhorted the congregation that birth control is wrong, extramarital sex is wrong, being gay is wrong, gay sex is wrong. I've hardly heard those things mentioned. I have heard countless homilies about mercy, sacrifice, our longing hearts, our brokenness, our stumbling search to learn how to love.

Dorothy Day could be a champion of the poor partly because she left the love of her life and offered her whole self to God. St. Maximilian Kolbe offering himself up to starve in the place of another at Auschwitz was on a continuum with his celibacy. St. Francis of Assisi could speak to the birds because his entire procreative urge was ordered to Christ.

So it's not a matter of being right on social justice and wrong on sex (nor a matter of celibacy being a higher calling than marriage). It's a matter of worshiping an entirely different Master than the world, whose gods are security, comfort, efficiency, power, property, prestige and control. I wanted to say to my friend, Haven't you ever wanted to bow your head in wonder? Haven't you ever looked around for Someone to thank? In so many words I did say those things, and then I wrenched my hands, for I could feel her embarrassment for me and my "archaic" views.

"I actually believe it," I stammered. "I believe Christ is the Savior of the world"....

For a second, I wished I'd come up with something snappier, more clever, more brilliant.

Then I remembered: broken, stumbling, poor--that's what we do best.
Posted by HEATHER KING at 9:02 PM