THE QUEEN OF PEACE ROOM 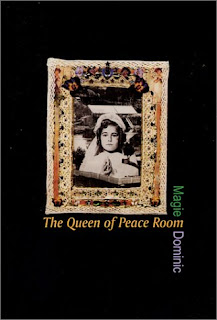 New York writer, artist, and costumer Magie Dominic was abused as a child in her native Newfoundland, raped as an adult, and married to an abusive husband. She also gave birth to a daughter. Part of the avant-garde theater scene at the legendary Caffe Cino in Manhattan, in the '80s she watched dozens of friends die of AIDS. On the eve of her 50th birthday, at the behest of some friends, she decided to make a weekend retreat at a remote convent/monastery in upstate New York.

The simple room assigned to her was called "The Queen of Peace Room." When the three days she'd initially planned on staying were up, she decided to spend a whole week. And here, among the meadows and trees and the wind and the light and a group of women who made space for her, who invited her in and allowed her to speak and let her be, she was finally able to look her past full in the face. In the Queen of Peace room, something shifted. In the Queen of Peace room, the fragments of her life began to reassemble themselves.

Then she wrote it all down.

She writes not as a victim, not as a feminist, not as an organized-religion-despiser (though, having attended some rather unfortunate Catholic schools as a girl, she initially has some misgivings about the nuns).

She writes as a human being with preferences, biases, memories, aches, desires and lusts. She writes not to blame, but to bear witness.

But  let this stunning,searing voice speak for itself:

"I walk along the paths surrounding the complex, then up the pristine wooded steps of the main house and can hear someone say, “All things that are supposed to meet will eventually meet.”
In the large, lightly furnished room, people are seated in a circle, and there is a peacefulness I want to wrap myself in. There is gentleness, tremendous energy, and an unexpected warmth, like the top of a luncheonette counter on a winter morning, just after the orders to go have been picked up."

"[M]y mind surges forwards and backwards, memories collide and overlap. I feel as if there isn’t enough ink in the world for what I’d write, as if my knuckles are filled with ink. I find another pen and feel more secure. I am at the dawn of my fiftieth year, with nuns in the woods, and it’s cold. I didn’t bring enough socks."

"Light danced around a row of white cotton nightgowns hanging on a line outside a convent in , outside a thousand quiet convents. I didn’t see this but I know it happened. It made the gowns move gently, like the women who wore them. The light made the crème satin ribbons around the necks glisten like fine jewellery. It surrounded these garments worn in sleep, filled them with the light of light. It had been doing this for centuries, as long as convents and clotheslines have existed. These nightgowns were like holy skins of angels hung out to dry. Not like rabbit skins drying, violence pinning them in place as accurately as gunshot. These gowns were the quiet skins of angels, teardrops moving and filled with light."

"There is a stillness that exists somewhere around , a peace that has settled on buildings and trees during the night. And the further away you get from the city, the longer this calm lasts, until, if you get far enough, stillness lingers on the trees and ground from sunrise to sunrise. From season to season.
This calmness didn’t exist on the trees near the car where my grandfather sat. Where I sat next to him.
NO!
He was sitting next to me. I was NEVER sitting next to him.
The stillness and the peace didn’t exist on the trees there. In that part of the forest, the trees were screaming. They made loud piercing sounds. They doubled over in pain. They threw up. They held on to each other in fear and disbelief. They pulled themselves up from their roots, throwing up as they ran. And the smell of their vomit permeated the forest. A family that permits child abuse is a suicidal family."

"The meadow is actually two meadows. As if it has been divided exactly in half by an invisible line of energy. As if one is the body and one is the mind.
The upper half is mowed close and bordered on three sides by trees, bushes, and some kind of red, wild, climbing berries. A wooden shrine to the Crucifixion is off to one side, partially hidden with overgrowth, a very private, personal area in the woods. The fourth side is actually a cliff that leads down to a lower wild meadow. A green wooden bench in the middle of the upper meadow overlooks everything.
The lower meadow is left as nature created it. Nothing sets foot there except wild creatures; it is an expanse of tall wild grass and high golden reeds which, at a distance, in the sunlight, make it look like a lake of liquid gold. Everything is bordered by towering trees. This is where I spend most of the afternoon. At the fringe of wildness."

"Somewhere, between the geography of the meadow and the complex itself, the layers of my past are unraveling, and nothing can stop it. The thoughts and images I’ve buried for years are rushing to the surface, wanting to be free. There is something in the landscape of this retreat house, maybe the land itself, an ability to connect with the power of the ground and the liquid gold alchemy of the meadow." 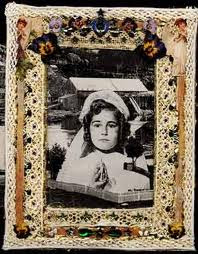 Publisher's link for The Queen of Peace Room
Author's website
Amazon
Posted by HEATHER KING at 1:39 AM

Email ThisBlogThis!Share to TwitterShare to FacebookShare to Pinterest
Labels: MAGIE DOMINIC, THE SERMON ON THE MOUNT, THE WRITING LIFE