THE LIFE OF CHRIST IN WOODCUTS: JAMES REID 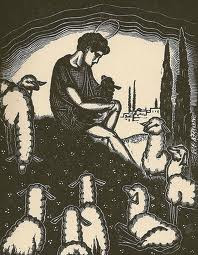 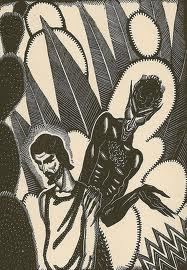 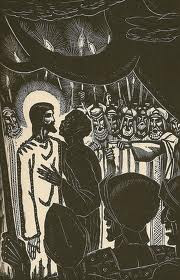 A few years ago a friend gave me a book called The Life of Christ in Woodcuts by James Reid--one of  "a host of maverick artists" from the early twentieth century" who "introduced the idea of the graphic novel, a story told exclusively with wood engravings." (from the back jacket).

Originally brought out in 1930, the book was republished in 2009 by Dover Press. Without using a single word, Reid manages to convey the whole story of Christ's birth, life, death, and resurrection.

One of my favorite cuts is when Christ was a young man and the other young people are pairing up, walking arm in arm around town, and he is watching from afar, and you can see the idea forming in his head...Oh that looks like so much fun. That looks really, really great! And somehow...that is not going to be for me....

Fellow wood engraver/graphic novelist Lynd Ward (1905-1985) apparently did a book called Vertigo--a subject that, if you have any feel for either, seems very much connected to the life of Christ....